The Intersec, which is held each year in Dubai, is the leading trade fair for protective and safety apparel and equipment in the Arabian region. For many years now, the LHD Group Deutschland GmbH has been present and with the protective clothing from LION has become established as a major player.

For COO Daniel von Chamier, who himself served actively in a fire service in the region for several years, the Intersec 2019 once again provides the opportunity of presenting a number of new developments. These include, among other things, new solutions for particle exclusion closures in the firefighters’ outer clothing, by means of which the firefighters are protected against carcinogenic substances in flue gas, and the newly developed fireproof hood with membrane fitting which is specially designed to protect the area between the collar of the jacket and the helmet-mask combination.
The “Extended Layered Approach” presented last year, a type of modular protective clothing system by means of which the level of protection can be adapted individually to comply with the level of danger involved, also attracted a great deal of attention with its new modern design. Von Chamier stated, “Customer interest was enormous and was not limited only to our product innovations as many of the discussions also involved the particular freedom of movement and the breathing ability of our protective clothing which has proved its worth over a period of many years”.

In addition to the models, “V-Force®” and “KINETIC”, highly praised for both their wearing comfort as well as their highest level of protection, the LION Group Inc. – US partner of the LHD Group Deutschland GmbH – attracted enormous attention at the mutual stand: proudly presenting the V-Force®-Model, on which the future protective suit of the New York Fire Department is based.

Von Chamier summed up the involvement at the fair, stating “It is a pleasure to receive such positive confirmation of our work and to see that our ideas and concepts, which are incorporated in our products, raise so much interest world-wide”. 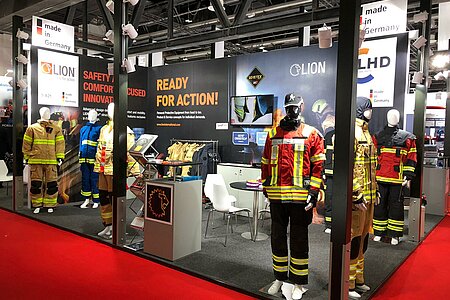 YOU WOULD LIKE TO LEARN MORE? WE WILL BE PLEASED TO ASSIST YOU, PERSONALLY!

WE ARE LOOKING FORWARD
TO YOUR VISIT!

YOU DON'T WANT TO MISS ANYTHING?

Follow us on Social Media and always stay up to date!